Known locally as The Hospital Chapel, this is one of the gems in Redbridge’s Crown – Graded II* by English Heritage, it is the oldest building in the London Borough of Redbridge, founded circa 1145AD by Adelicia (Adeliza), Abbess of Barking, as a hospice for 13 aged and infirm men.

Abbess AdeliciaIn those days Barking Abbey was a wealthy and influential nunnery, established in 666AD and endowed with the Manor Barking (including Ilford and Dagenham). The Chapel was dedicated first to St. Mary the Virgin. Later Mary Becket became Abbess in succession to Adelicia and she arranged for the name of her brother, Thomas à Becket, to be added to the dedication in his memory.

The complex consists of the Chapel itself plus almshouses on each side which were quarters for the poor brethren and the chaplains. These have recently internally been converted into well ordered modern flats.

The Hospital was governed by a Master, originally appointed by the Abbess, who in later times at least was provided with a large house to the east adjoining Ilford Lane (it was demolished in 1905).

By 1219 it was admitting lepers (leprosy spread through Europe perhaps as a result of the Crusades). Little medical treatment could be offered, only shelter and spiritual comfort provided by the Chapel and the chaplains (there were originally two). Under Statutes made for it by the Bishop of London in 1346 there was to be provision for 13 leprous brethren. An archaeological investigation of the courtyard during 1959-1960 revealed between 22 and 25 burials to the left of the present porch and more recent examination has proved that several were suffering from leprosy. These remains lay at a level lower than the surviving foundation of the Chapel or at least earlier than the 14th century.

The nave and chancel of the present building were built during the 14th century, or earlier and the north wall is formed by the original Norman wall when the Chapel was built. During recent conservation work, an infilled window space was discovered in the Norman Wall, which archaeologists think was infilled during the first two hundred
years after the Wall was built. The top of a painted mural, still faintly seen, was left exposed.

Although the original memorial vanished from the Chapel during the 18th century, a ‘rubbing’ has survived of a brass commemorating a master and chaplain who died in 1475 with an interesting epitaph: 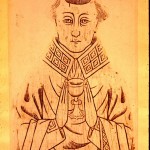 John Smyth
“Here lyeth the body of Sir (Revd) Jne Smyth some tyme Maister of this place. A good householder, a fine man, large in almys, he did worship (was a credit) to all his kyne, all the feloship was the meryer that Sir Jne Smyth was ynne.
I pray to God to have mercy on his soule and all Christen (souls)  He passed to God the 11th day of November in the yere of Grace AD MCCCCLXXV.  For Charitie say a paternoster and ave.!”

Our Chaplain includes a paternoster and ave for Sir Jne during our Remembrance Service on the 11th November each year.

The ancient Abbey of Barking was dissolved by Henry VIII in 1539 and demolished between 1540 and 1541. But the Ilford Hospital Chapel having its own endowments and constitution, survived this threat and also the abolition of Chantries in 1547, probably because of its function as a chapel-of-ease as well as a hospice.

It passed into the hands of the Crown who leased out the Mastership. Thomas Eden who was master in 1540 was apparently allowed to remain. A Dr Cooke was there in the 1550s and in 1558 it was granted to John Vaughan, Master in Chancery. He subsequently sublet it to Henry Fanshawe, a senior civil servant (Remembrancer of the Exchequer) living at Clayhall, who, before his death in 1568, assigned his lease to his nephew and heir, Thomas Fanshawe.

In 1572 Elizabeth I granted the ownership to Thomas Fanshawe on condition he provided a Master, a Chaplain and support for 6 poor men.

The Fanshawe family retained the patronage for almost a century. During the Civil War and Interregnum, the Hospital tithes were sequestrated (confiscated) – the Fanshawes were Royalists – and a scheme was proposed to make the Chapel into a parish church.

The Hospital was returned to the Fanshawes at the Restoration but in 1669 they sold effective ownership by leasing for a 1000 years at a peppercorn rent of 1s p.a. The descent of mastership is then somewhat complicated although traceable.

In 1727/8 the patronage was bought by Crisp Gascoyne (later Sir Crisp and Lord Mayor of London 1761) who married the daughter of Dr Bamber, a wealthy physician living in Barking. Their son, the first Bamber Gascoyne (1725-1791) renovated the Chapel and presented new communion plate (still in the Chapel’s possession).

Much later in 1821, Frances Mary, only daughter and heiress of the second Bamber Gascoyne married James Cecil, Lord Salisbury, whose family remained owners until 1981.

Early in 1982 the late Lord Salisbury handed over the Ilford Hospital to the diocese of Chelmsford who formed the Abbess Adelicia Charity to take over the administration.

This Charity still own and administer the Chapel site.